All of a sudden, 2009 has turned into a dizzying series of storms and it feels like I'm on the verge of death, but somehow I'm hanging on and having a good time. (^_^

X JAPAN's countdown gig was at the end of 2008, so the beginning of this year was a hellish period of checking and beginning the tangled mess of things I have to do for my solo concert DVD. I also had some really important things to do in L.A. and made a quick trip there, then gave all my energy to the X JAPAN concert in Hong Kong.

I've wanted to finish writing this for several days, but I caught my first cold in a while and have been putting off all of the things I have to do (>_<). I haven't had such a high fever (39 degrees...) in so long…I felt like I was dead. And I couldn't stand, which was pretty scary…

I caught some kind of horrible virus on the way back from L.A., but then only had about twelve hours to spend in Tokyo. When I got back, I was immediately plunged into a hell of meetings that lasted until the middle of the night. Then it got so bad that I had no choice but to accept the help of a friend and be put on an I.V. before heading to Narita Airport early the next morning. It's definitely hard to not be able to get enough sleep…I felt like a corpse in the airplane from Tokyo to Hong Kong, and kept fighting with the virus until the day of the concert.

I've finally emerged from the depths of sickness and am feeling a lot better, though. I'm really in awe of my own astounding resilience, and I'm sorry for making everyone worry! m(_ _)m

The show in Hong Kong was X JAPAN's first overseas concert, and I'm really honored that I was able to take part in such a momentous occasion. The two days of fantastic shows were really filled with energy and beauty, and I think the quality of the shows was the best since X JAPAN got back together. And I definitely feel that hide also had a great time at X JAPAN's first overseas show. I gave my everything to doing what I could and should do, but of course, there are still all sorts of issues to work out…

I personally hadn't been to Hong Kong in a long time, probably for about seven years. I visited frequently before that and used to really like Hong Kong. With our insane schedule and me getting sick, the time when I wasn't concentrating intensely on our performance was spent praying to get better. I didn't get the chance to enjoy Hong Kong, but I felt really energized by the place I hadn't been to in so long. I was also thrilled to be able to see all the Hong Kong fans after such a long time. Things were different than they used to be, but I felt as happy as if I were returning to my second hometown.

When I got back to Japan, I started work on the RISE TO COSMIC DANCE DVD that will be on sale in March – I'll be working on TD and editing all this month. The band is so big that there is an insane amount of things to do. (>_<) I'm really concerned about whether we can get it done in time. I guess all I can do is just give myself up to the flow and hope things work out.

In a lot of different ways, this year is an important one to me. I'm going to work to my full potential and keep on pursuing my "SUGIZO MUSIC." Preparations are under way for the X JAPAN world tour, and JUNO's tour has already started. How are things going to turn out? In any case, as long as I'm alive, I want to give my whole body and soul to working on my music, all of my projects, and expressing the things I want to share. 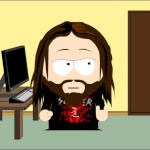